The Pt100 RTD is a platinum RTD sensor that delivers superior performance over a wide temperature range. Platinum is a precious metal that has the highest resistivity as a commonly used RTD material and enables small-sized sensors. An RTD sensor made of platinum is sometimes referred to as a platinum resistance thermometer or PRT. The Pt100 RTD has an impedance of 100 Ω at 0 °C, and a temperature change of about 1 °C causes approximately a resistance change of 0.385 Ω. When at the limit of the available temperature range, the resistance is 18.51 Ω (at -200 ° C) or 390.48 Ω (at 850 ° C). Higher value resistive sensors such as the Pt1000 or Pt5000 can be used to increase sensitivity and resolution.

The CVD coefficients (A, B and C) are specified in the European IEC-60751 standard. Equation (3) shows these coefficient values. R0 is the resistance of the RTD at 0 °C. 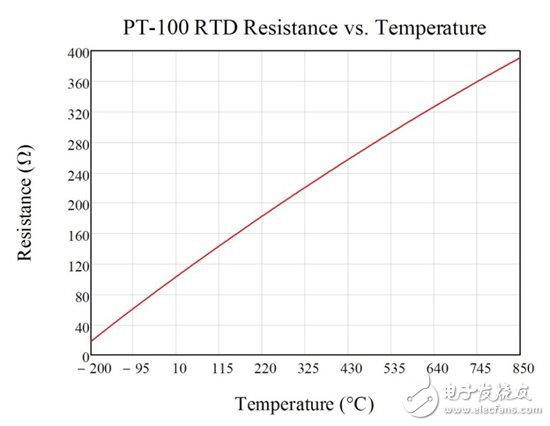 Three-wire RTD configurations are popular because they strike a balance between cost and accuracy. In the recommended three-wire configuration, an excitation current (I1) can generate a voltage potential across the RTD element. At the same time, another excitation current (I2) is injected to cancel the resistance of the RTD lead (RLEAD) from the final measured value, as shown in Figure 2 and Equation (4-7). 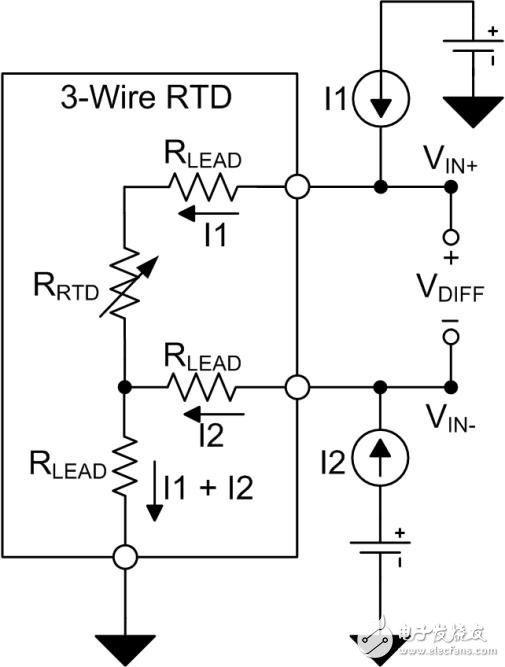 The differential RTD voltage VDIFF is typically converted by an analog to digital converter (ADC) and passed to the processor for interpretation. The ADC compares the input voltage to a reference voltage, VREF, to produce a digital output. Figure 3 shows a three-wire RTD measurement circuit using a discrete external reference voltage. Equation (8) defines the final conversion result based on the total number of digital codes, the RTD resistance, the magnitude of the field current, and the reference voltage. This example assumes that the ADC has a full-scale range of ±VREF. As shown in the figure, errors due to the magnitude of the reference voltage and field current, noise, and temperature drift directly cause conversion errors. 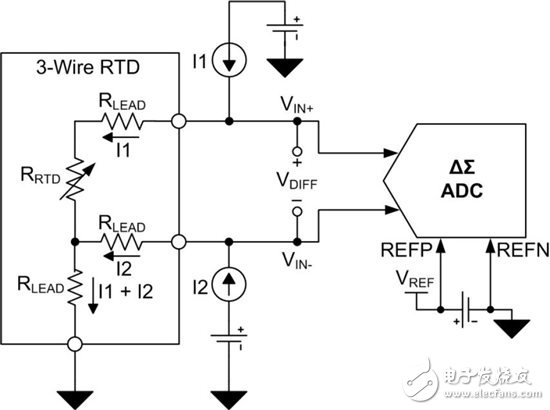 The voltage drop across the RTD and RREF resistors is generated by the same field current (Equation 9 and Equation 10). Therefore, changes in the field current are reflected in both the RTD differential voltage and the reference voltage. Since the ADC output code indicates the relationship between the input voltage and the reference voltage, the final conversion result can be converted to the ratio of the RTD resistor to the RREF resistor, not depending on the value of the reference voltage or field current (Equation 11). Therefore, if the excitation current is perfectly matched and does not affect the final conversion result, the error due to the magnitude of the excitation current, temperature drift, and noise can be eliminated. In addition, the proportional configuration also helps reduce the effects of external noise (which seems common to the input voltage and reference voltage) as this noise is also eliminated.

Ms. Diana Yang
What can I do for you?
Contact Supplier